Last week was pretty interesting for PSTH (Just to say at least) . Bill Ackman  finally got the Deal Announcement but stock fell almost 14% at one point and closed almost 11.94% down. Deal itself is very creative and interesting . So just to summarize $20 (total count 200 million shares = 4 Billions + 1.6 Billions from his hedge fund - PSH. So total war chest of 5.6 Billions . Here is the deal highlights :

Pershing Square announced a deal for Universal Music Group.  “It is in discussions with Vivendi S.E. (‘Vivendi’) to acquire 10% of the outstanding Ordinary Shares of Universal Music Group B.V. (‘UMG’) for approximately $4 billion, representing an enterprise value of €35 billion for UMG.”

PSTH expects to fund the Transaction with cash held in its trust account from its IPO ($4 billion plus interest), and approximately $1.6 billion in additional funds from the exercise of its Forward Purchase Agreements with the Pershing Square Funds and affiliates. Approximately $4.1 billion of these proceeds will be used to acquire the UMG Shares and pay transaction costs

Remaining  $1.5 billion balance to be retained by PSTH Remainco. PSTH Remainco will Pursue Another Business Combination Following the Proposed Transaction

After funding the UMG purchase and related transaction expenses, PSTH Remainco will have $1.5 billion in cash and marketable securities. In addition, the Forward Purchase Agreements will be amended to provide that the Pershing Square Funds will continue to have the right, but not the obligation, to buy approximately $1.4 billion of PSTH’s Class A common shares to fund PSTH’s future business combination transaction. The Pershing Square Funds will own approximately 29% of PSTH Remainco before the exercise of any Additional Forward Purchase Agreements.

An affiliate of our Sponsor has formed an entity that will be known as Pershing Square SPARC Holdings, Ltd. (“SPARC”), which is a Cayman Islands Corporation.

SPARC is not a SPAC. It is a Special Purpose Acquisition Rights Company. Unlike a traditional SPAC, SPARC does not intend to raise capital through an underwritten offering in which investors commit capital without knowing the company with which SPARC will combine.

Instead, SPARC intends to issue rights to acquire common stock in SPARC for $20.00 per share to PSTH shareholders (“SPARs”) which can only be exercised after SPARC enters into a definitive agreement for its initial business combination. The SPARs are expected to trade on the NYSE and have a term of five years, subject to extension….

Assuming all SPARs are exercised, SPARC will raise $5.6 billion of cash from SPAR holders. SPARC is expected to enter into forward purchase agreements with affiliates of the Pershing Square Funds, the SPARC’s sponsor, for a minimum investment of $1 billion, and up to $5 billion, subject to increase with SPARC’s board consent. ...

SPARC’s structure has been designed to allow SPAR holders to avoid incurring the opportunity cost of capital of a typical SPAC, as the SPARs will not be exercisable, and holders will not be able to acquire shares in SPARC, until a definitive agreement has been signed. The SPARC Sponsor will also benefit by not having any time pressure associated with the typical two-year SPAC commitment period.

So stock fell $4.69 since I bough the diagonal spread . Losses should be around $469 for $100 shares , but it's only $138. This is because implied volatility was way higher earlier and that kind of crashed when market didn't like the deal. I have closed the position. 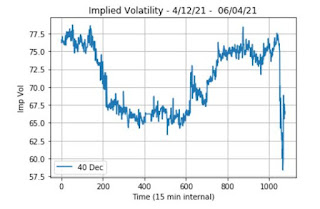