I always prefer to invest in future trends.Over the long-term, these will always be profitable even if market or economy crashes in short time. Trends could be autonomous vehicles,  smart cities,  next generation VR /AR or any unknown trend that we are not even aware of.

One think is common in these trends - Semiconductors . This is currently being used in all aspects of modern life and  will be the most crucial in future and no investment makes more sense than investing in Wafer Fab Equipment(WFE) manufacturers.

Chip shortage because of the covid (supply disruption) is being echoed in almost 275 public company's earning calls according to data from sentieo. Data Centers, Crypto Miners, automobile manufactures and Gamers Are All Battling for Semiconductors. 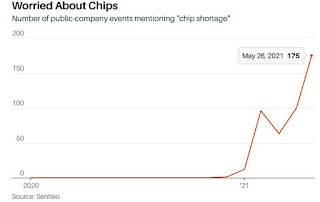 Semiconductor content is steadily increasing in pretty much everything that we use. They are the brains of modern electronics. From healthcare, communications, computing, and transportation to space exploration - chips are being heavily used, more than ever before. Government around the world are treating them as the strategic edge for the better future. 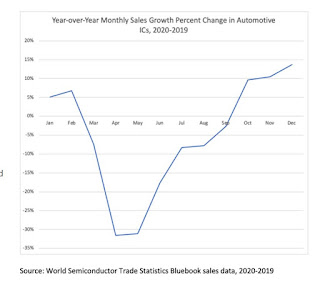 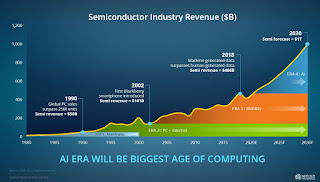 WASHINGTON—April 30, 2021—The Semiconductor Industry Association (SIA) today announced worldwide sales of semiconductors totaled $123.1 billion during the first quarter of 2021, an increase of 3.6% over the previous quarter and 17.8% more than the first quarter of 2020. Global sales for the month of March 2021 were $41.0 billion, an increase of 3.7% compared to the previous month. SIA represents 98% of the U.S. semiconductor industry by revenue and nearly two-thirds of non-U.S. chip firms. 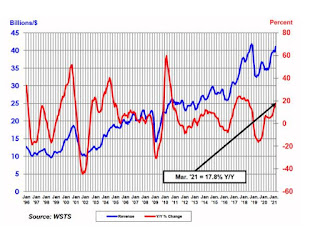 As a result, companies are investing heavily to ramp up the production. Intel is planning to spend $20 billion for two new plants in Arizona. Samsung Electronics will invest $116 billions in chip & foundry over next 10 years, TSM will be spending almost $100 billions over the next 3 years. China has invested heavily to build a home grown semiconductor industry and President Biden’s latest proposal has $50 billion for the U.S. semiconductor industry.

Hard to scale up production

In order to meet the increasing semiconductor demand, companies are steadily increasing overall Fab (front-end semiconductor fabrication facilities) capacity utilization over the past two years but it takes time. According to SIA

Increasing semiconductor capacity utilization takes time, because semiconductors are incredibly complex to produce. Making a chip is one of the most, if not the most, capital- and R&D-intensive manufacturing process on earth. The fabrication is intricate and requires highly specialized inputs and equipment to achieve the needed precision at miniature scale. There can be up to 1,400 process steps (depending on the complexity of the process) in the overall manufacturing of just the semiconductor wafers alone. And each process step typically involves the use of a variety of highly sophisticated tools and machines. In short, making semiconductors is exceedingly hard and, therefore, takes time.

WFE manufactures are growing steadily over the past decade, better than any other industry. This is echoed by stock price of various WFE companies - ASML, AMAT, LRCX, KLAC .

2021 WFE spending trending above $75 billion, with strength in the second half of the calendar year .

The company sees the total market for chip factory equipment growing to the high $70 billion range this year, Chief Financial Officer Dan Durn said on a conference call after the results were reported. That will expand again in 2022 to bring the two-year total to more than $160 billion, he projected. 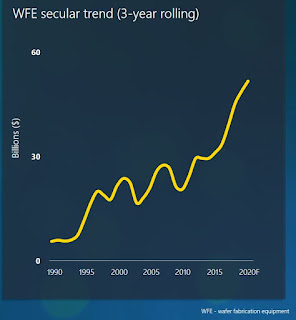 In summary, WFE spending will grow exponentially because of the current supply shortage & long term future trends. As we grow towards more Artificial intelligence/Machine learning , every industry will use semiconductors. We can't even imagine now - the future trend , jobs , type of memory,  logic chip needed or which country or company will win the semiconductor race, but one thing is certain that they will all buy the equipment from WFEs manufactures.

Selection are mainly > = Large Cap . Because of the research & IP involved, competition for Large Cap is almost none. One basic strategy would be putting 25 % each of these companies -ASML, LRCX ,AMAT & KLAC , and relax. Return over last 10 years with comparison with s&p 500 & NASDAQ  :