Jan 2020 seems like a distant memory now. Things that are practical & usual now , are difficult to imagine back then. With covid-19 arrival, United states economy entered into recession in Feb 2020. Ending a decade long historic expansion.
With trillions of dollars deployed by FED & congress, one has to wonder - how much future inflation will this bring.Since of the significant cause of inflation is the "money supply".
Indicators
CPI (consumer price index) is the widely known inflation indicator for consumer. It basically measure the changes in the price paid by consumers on a basket of goods & services. It is produced monthly by BLS . 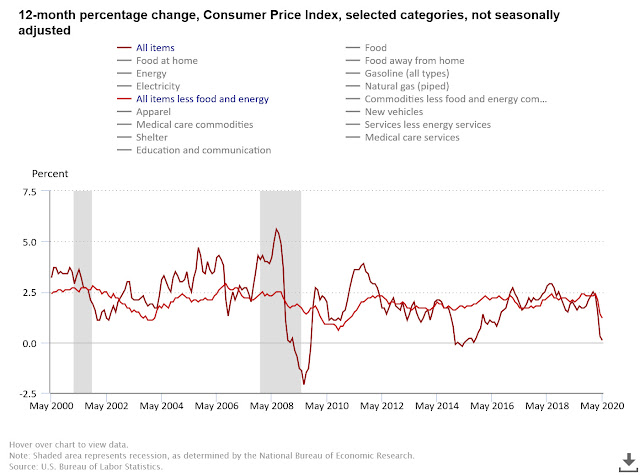 Producer Price Index (PPI) is another inflation indicator released by BLS which measures average selling price changes received by domestic producers.
Since "price increase" should be as a whole economy rather than individual goods / services or basket, FED uses PCE (personal consumption expenditures) price index. This is produced monthly by Department of commerce
FED has a target of 2% inflation rate over time. They try to achieve this objective using Monetary policy.
Causes of Inflation
Broadly inflation can be caused by "Demand-pull" or/and "Cost-push" inflation.
Excessive money supply can lead to demand-pull inflation. Since the production capacity can be increased over time, any sudden demand shock can lead to price inflation . One example could be demand of face mask and cleaning supplies because of the pandemic. Or excessive money supply by central banks results in higher purchasing power resulting in higher aggregate product demand.
Cost-push inflation is caused by the rapid increase of production cost because of the raw material  or labor/wage increase. Tariff can be one example for a cost-push .
Let's look at some past examples
1) 1970s oil price rout
Because of the oil embargo by OPEC , price of the oil was increased to 400%  globally in 6 months.
2)  Great Inflation
Great inflation lasted around 2 decades - mid 1960s to 1980s. inflation grew from 1.6 percent in 1965 to almost 15 percent by 1979
Key points :
--Federal reserve policies allowed excessive growth in the money supply
-Need to be consesus among fed chair
-not admitting inflation beacuse of the faulty indicators so it  doesn't require any policy action
-Lack of independence of FED and arrangement between monetary and fiscal policy, They were dependent on each other.  political factors
- Oil crisis "cost push" caused exponential oil prices
Current Situation
FED steps up in a big way to put an end to this recession. Let's look at the different programs/actions started by FED to understand the trillions of Dollars unleashed in the economy. Who will get this extra money - supply will determine the future demand-push hence inflation. Over here, I am analyzing the reaction of the action  regarding the money supply in the economy rather than the action itself.
a) " The Committee decided to lower the target range for the federal funds rate to 0 to 1/4 percent."      (effectively zero)
b)  "Over coming months the Committee will increase its holdings of Treasury securities by at least $500 billion and its holdings of agency mortgage-backed securities by at least $200 billion. "
c)  "In addition, the Open Market Desk has recently expanded its overnight and term repurchase agreement operations."
d) "Federal banking agencies provide banks additional flexibility to support households and businesses.The statement notes that banks have more than doubled their capital and liquidity levels over the past decade and are now substantially safer and stronger than they were previously. As a result, the agencies are encouraging banks to use that strength to support households and businesses. "
Facilities established by FED:
--- Federal Reserve Board announces establishment of a Commercial Paper Funding Facility (CPFF) to support the flow of credit to households and businesses.
---Federal Reserve Board announces establishment of a Primary Dealer Credit Facility (PDCF) to support the credit needs of households and businesses.
---Federal Reserve Board broadens program of support for the flow of credit to households and businesses by establishing a Money Market Mutual Fund Liquidity Facility (MMLF). Included purchases of state and municipal debt with a maturity of 1 year or less.
---Primary Market Corporate Credit Facility
---Secondary Market Corporate Credit Facility
---Main Street Lending Program
---(Foreign & International Monetary Authorities)FIMA
Stock Market effect
Worth of the company is determined by its market capitalization if they are publicly/privately traded (which most companies are these days). Because of the recent technological advances, it's easy for retail investors to trade. Motivation behind investment from Activist investors are also because of the stock price.  As a result of these, Organization main focus is their stock price. As long as their stock price elevated, their market capalization  will make sense to take more risk or to do what investor require. So their profit margin/ profit / revense won't matter as much as it should. For example, amazon is a major dis-inflammatory force. For them, low consumer prices are justified because they can capture more market share and as a result  can gernerate rvenue. Being profitable is a secondary goal.
Risk with inflation
After the great inflation, Federal Reserve gained a credibility for controlling inflation with combination of higher interest rate and slower reserve growth. That's why , I believe the primary risk with inflation is that the policies can put the economy in recession. When J Powell became the FED chairman in 2018, he raised interest rate 4 times in a year which almost put the economy in recession (also because of trade war ). Next year he had to change the tone and finally there were 3 rate cuts. Achieving the balance is significantly difficult because of the global nature of the economy and there is always a geopolitical / economic risk in at least one of the important developing or developed economy. In other words, there will be a always a policy mistake since we live in a global economic environment.