Fear of a impending recession is also important as the actual recession. And sometimes this fear, can cause the actual recession. One of the prominent sign of a recession is the inversion of curve - 2 to 10 year yield. It is significant because it shows that the long term rates 10 year are less than the short term rate, indicating that Banks will reduce lending ( popular belief) , since they are getting more interest with the overnight Funds rate - 2.25 % (this directly influences 2 year yield) than lending. This will lead to a credit crunch which will turn in recession ( in next 2 years). So the key here is "credit crunch". Historically inverting is caused by the FED tightening. Back in 2007, when the credit was dried up, FED had to cut interest rates & QE (Quantitative easing) in order to revive the economy. But in current case FED is loosening. ( Did a 25 basis point cut in July, hopefully will be cutting more due to inversion). I believe this is because of the slowing global economy and to make sure there is a ample credit available. In my opinion, with the next FED cuts , yield curve should steepen.( Although trade war will continue to put some downward pressure on the 10 year).

There is also a net interest margin -Difference between what bank earns on loans to  what it pays on the money market account ( by investing client assets in low risk assets like Treasury , CDs , etc).  This is positive for the banks, but I believe it will decrease with inversion.

So this week , 2 year to 10 year actually inverted since 2007 (last great recession ). This is primarily because of the slowing global economy and Trade war with China. The US retail data and other indicators shows health customer. Although investor and companies sentiment is lower. This is shown by this inversion .

As shown above it was negative just before the 2007/2008 recession.Because of this fear of impending recession, DOW plunges almost 800 + points with other indexes also posting their biggest 1 day yearly loss. And this happened after getting weak number from china & Germany. Although the weakening of the bond yield is been going on since the trade talks were halted and White house raised the tariff to 25% from 10%. There are two parts here - 2 year (majorly influence by FED funds rate) and 10 year (influenced majorly by economy & global growth). So I am splitting everything in 3 parts :

a) Cause
These are the indicators which indicates the actual health of the Global Economy. In my opinion, indicators are : 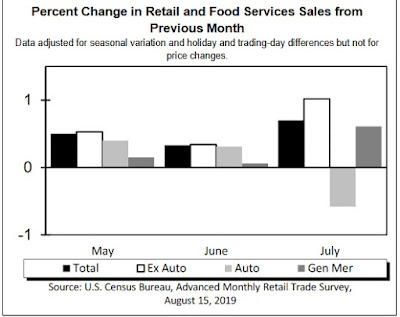 2) ISM Manufacturing Report On Business -  Purchasing managers index (PMI) - August 1 2019.
PMI has different components - New Orders, Supplier Deliveries, Inventories, Backlog Orders. It basically give the snap shot of the manufacturing activity and health of the overall economy. Above 50 means expansion of the economy and below 50 means contraction. However, A PMI above 42.9 percent, over a period of time, generally indicates an expansion of the overall economy.

3) Current Employment Stats : Non-farm payroll with unemployment rate is one of the main labor data. This is released by U.S. Bureau of Labor Statistics (BLS). They also report Average hourly earnings in the same report but since inflation is muted, this number is not important than it used to be. However, a sudden rise for few months, can give indication for inflation.